The Apocryphal Tale of the Octopus Liver

Before we begin, let me quickly introduce my dad…

My dad wore a Greek fisherman’s hat everywhere. My dad cooked squid spinach. My dad was notorious for eating unusual things, particularly seafood. He told us which flowers in our garden were technically edible and snacked on them. He fossicked in rock pools and consumed their contents.

We thought it was excellent. As kids, we showed our appreciation through gleeful declarations of how grossed out we were accompanied by general screaming. He retired the fisherman’s hat sometime during my teenaged years, but otherwise remains as is.

This is the tale of the octopus liver. It happened when I was about eleven or twelve. It is an incident of some contention in our household. There have been denials, arguments, blatant lies.

But this is how I remember it…

It started, logically enough, with an octopus. We caught the eldritch horror in a net while camping. It oozed through the mesh, tearing it wider, and nearly escaped the eskie. It was gross, horrifying, and absolutely amazing. 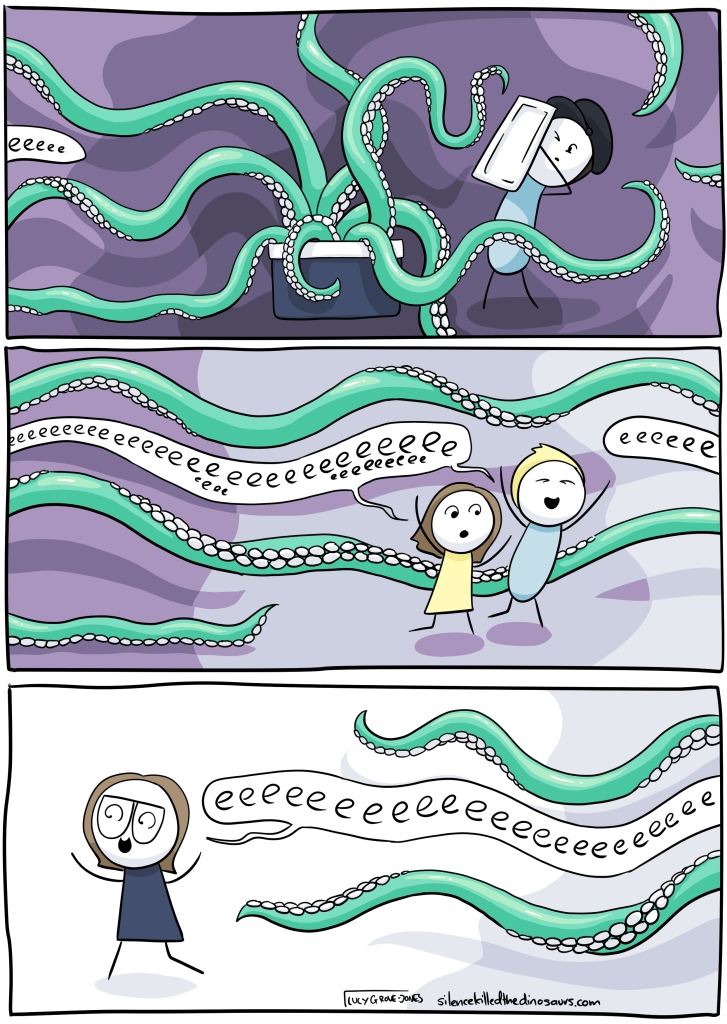 I believe it ended up cooked and eaten. That is generally what one does with caught seafood, but I have no firm memory of it.

That is, except for the liver.

I remember very clearly because it went into the freezer, and I was in a habit of keeping track of questionable freezer content.

My freezer diligence began a little while earlier when dad killed our excess roosters (we were promised one rooster and four chickens, but we got five roosters), put them in the freezer, and talked often and lovingly of cock a vin (a French recipe for cooking roosters—not whatever you were thinking). I would not eat ex-pets, even if they had been shouty arseholes. An anxious child and a fussy eater (by my dad’s standards), I counted frozen roosters every time we were having chicken anything.

And so, after the octopus, whenever I rummaged in the freezer for ice-cream, I double checked the icy little parcel of liver was safely tucked away. 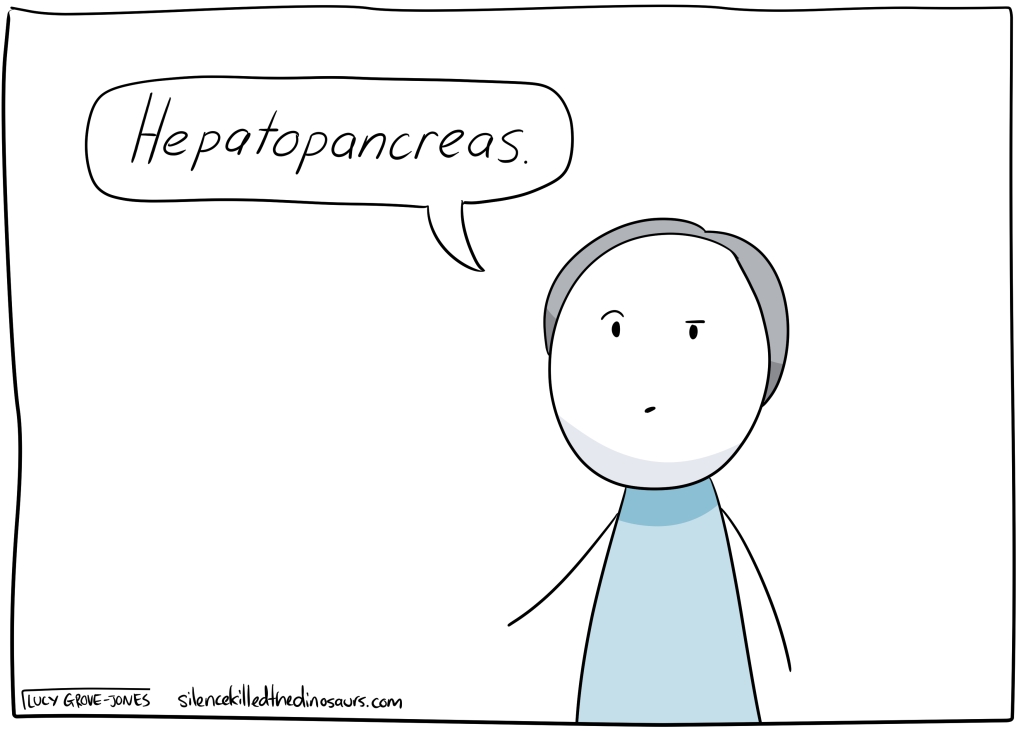 Which, with hindsight, is an almost plausible explanation. Almost plausible, because in reality he didn’t cook it in butter and use it as a sauce, he cooked it in the microwave.

… Without pricking it first. I added the microwave to my list of Things To Be Anxious About In The Kitchen and quietly avoided using it for a very long time.

But that’s not the end. 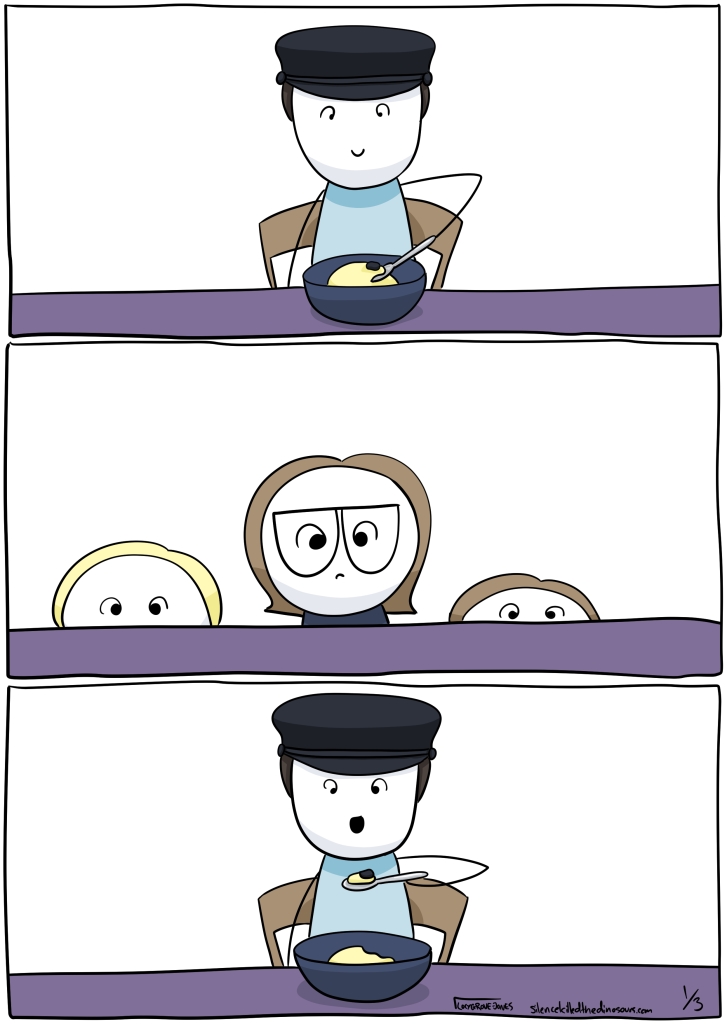 The moral of this story is my dad kicks your dad’s butt, always prick your cephalopod hepatopancreases before you microwave them, and definitely don’t forget to remove the ink gland.

First up, a big thank you to my dad for being endlessly interesting and an excellent sport! I’m not sure he entirely understands why I always found this episode so funny (or why his insistence that it was a hepatopancreas and not a liver was so adorabley dad-funny that I worked it in), but he still played along when I asked if he would mind if I wrote (the version I remember) down and showed it to the internet. That’s love.

I’m not sure if it’s necessary to say this, but just in case … my dad is a marine biologist and has passed exams on which rock-pool discoveries are edible and which are certifiable jerks who will stab you with venom* that paralyses your autonomic nervous system, potentially shutting down your lungs and suffocating you. So probably don’t follow his lead in picking up and eating random things unless you also have some sort of relevant knowledge/experience and know what’s what.

If you love my stories and comics, check out my store and my Patreon page. You can support my work and get unique rewards!

* That’s right, I know the difference between venom and poison. You may swoon now.

26 responses to “The Apocryphal Tale of the Octopus Liver”